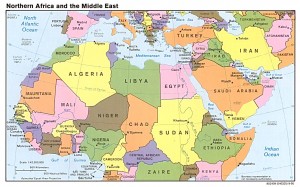 This interdisciplinary area studies minor within the international studies program seeks to offer students a broad background in the languages, history, politics, and cultures of the Middle East. It draws on the existing strengths of a number of departments and faculty members at The College of New Jersey. The minor program consists of five courses plus a language requirement.

Two of the following:

HIS  341: Islamic History from Muhammad to the Ottomans
HIS  342: The Modern Middle East
POL  357: Politics in the Middle East

One language course at the 200 level in Arabic

(Hebrew, Persian, or Turkish by special arrangement) or equivalent proficiency (intermediate low as defined in the ACTFL guidelines).

Three additional courses such that the total of five courses are drawn from at least three disciplines, chosen by the student from an approved list, or by advisement.

Students are strongly encouraged to work with their advisers to develop a coherent focus as the fulfill the minor’s requirements. Three of the five courses must be at the 300 level of above.

(descriptions and prerequisites are available under department listings)